Chimanimani! Oh how my heart came alive in the serene mountains of this beautiful village. In the aftermath of chaos and destruction, the Spirit of God was moving in awesome power and might. It was as if we were standing under an open Heaven. Blessings flowed in us, through us and out of us as we ministered alongside Pastor Richard and his lovely wife Elizabeth for four days in Zimbabwe.

On 14th/15th March 2019, Cyclone Idaí made landfall in Beira, on the coast of Mozambique. Throughout the night and early hours it continued to tear through the highlands and the lowlands of the nation, smashing the bordering mountains of Zimbabwe. This was the hour that around 90% of Chimanimani, a mountain village not too far from the town of Chipinge, ceased to exist. The sheer volume of water amassed into three giant rivers that met in one location – Chimanimani. Consequently, many people drowned or were swept away to their death in the torrents. And as if that wasn’t enough, apparently, as if from nowhere, thousands and thousands of giant boulders were knocked off the mountain in a giant landslide, that completely buried the entire village. The following morning, those living in the higher, more rural parts of the village awoke to a scene they will never forget. 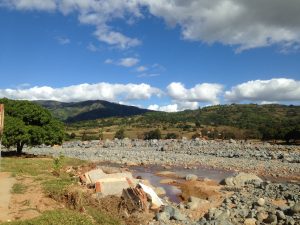 Chimanimani, a village buried beneath a landslide and boulders

Pastors Richard and Elizabeth, from Iris Zimbabwe heard of the news and set off from the other side of the country. Their motive; to bring the gospel of Jesus Christ to the broken hearted. Once in the vicinity they traveled on foot for hours, just to arrive at the location of devastation. It was during this time that they met our hosts for this trip. A wonderful couple from higher in the mountains asked Pastor Richard to start a church in their home. They owned a small banana plantation and had enough veranda space for a small service.

The people came on foot from miles around. I wrote in my previous blog Waiting Game Thwarts Bandits about our first night and how we escaped the schemes of the enemy. But this next morning was such a special time for me.

Meet ‘Mama’. Mama was our host. A joyful woman, full of the joy of the Lord. She served us more food than we could physically fit in our stomachs; and did it all with a smile on her face. As I was teaching the word of God to some of the local women, we asked her to read a passage from her Shoni bible. She struggled. Not for lack of education, but for lack of vision. She held the bible not 3 or 4 inches from her face, squinting and straining as she read. I said, “Mama, I can I pray for your eyes?” She explained through interpreters (her son and nephew) that her vision was limited and she had serious pain in both eyes. 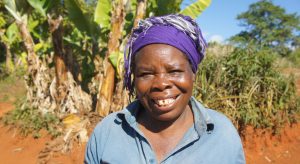 I had the young men lay hands on her eyes and we commanded healing. The pain left instantly and her vision became much clearer. You wouldn’t think it possible, but her smile grew, beaming from ear to ear. We prayed once more, and she was able to read her bible from a normal reading distance. Her joy turned into dancing. She shared her testimony with everyone around.

As it was Sunday morning the people began arriving for church. They piled onto the veranda to worship Jesus with singing and dancing. No musicians needed. Just voices and passion. Mama, shared her healing testimony and broke into a worshipful song of thanksgiving. Everyone joined in, celebrating her victory.

Mama Worshipping God for her Healing

What About Me? Asks the Chief…

The guest of honour, the village chief arrived a little late, and so after the service Mama shared her testimony with him. His response: ‘What about me? I need healing in my eyes!” Through an interpreter, Mama’s daughter, I explained that Mama had the authority to pray for the chief. We decided that considering she had received the healing breakthrough, she was the one with the anointing. She laid hands on his eyes and BAM! His sight was restored so that he could read his bible too.

We celebrated and I walked away to continue praying for others. Next up was my interpreter’s husband. He had heard the first testimony and watched the second healing. With hope rising up in his voice he explained, I can’t read my bible either. So I had my interpreter lay hands on her husband’s eyes and command healing. Well you’ll never guess what happened?… Yep, his eyesight was restored.

The Power of Three 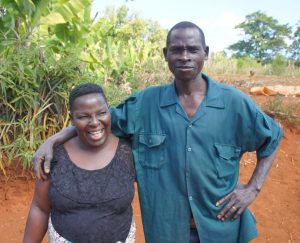 Bubba was the third person to receive restored vision after his wife laid hands on him.

That was THREE! THREE in one day. I had never seen one blind or partially sighted eye restored before, and today I saw THREE. The best part was that I didn’t actively pray for any of them, I just facilitated the prayer. This is what it’s all about. Raising up the nations to do what Jesus did. It’s not about waiting for the missionaries to come at all. It’s about living in the Kingdom and bringing the Kingdom of Heaven to earth.

Since our visit in June 2019 we have heard wonderful testimonies of healing and deliverance in this place. It is my desire to one day take a team back to minister here in Zimbabwe. My heart is full and I know the Father is beaming. The light always shines the brightest in the darkest places.

Please hold Pastors Richard and Elizabeth in your prayers as they continue a great work here in Chimanimani. To connect with them click here Iris Gweru.

Sometimes the road ahead seems barren but if you l

Today Grandad wanted to go on a hunt for #snowdrop

“Look at the lilies of the field and how they gr

This photo pretty much sums up my week serving as

Flashback to our time in Zimbabwe earlier this yea

I love this cute little house of prayer in the mid

This precious lady had been unable to walk for som

Human words are not enough to console the devastat

Every face has a story to tell. This is the face o

The Kingdom of God is righteousness, peace and joy

One of the hardest things about being overseas is

Such a privilege to lead this group of world chang